A downloadable game for Windows

Yu will be getting married to Princess Hime, but Yu will need to get some things done before he reaches the castle. Battling his way through the kingdom, Yu will gather everything needed for the wedding and perhaps listen to some superstitious people talk about ghouls.

Inspired by Lanea Zimmerman's Tiny 16 tileset, I set out to create a 'tiny' game, trying not to deviate too far from the original limited tileset. Some add-ons to her set were used, as well as some custom edits, but overall, the goal was achieved. Originally planned to be done in only a few weeks it took months to complete

Concept
Yu is about to marry Princess Hime. He’s supposed to meet her at the castle, but then, he finds her stuck down a well. She doesn’t want to talk about it or let you near the well, but she does want you to help her find a special magical item that she left in the castle. As you travel, you need to pick up everything you’ll need for the wedding. There’s also an intriguing story hint about everyone being clones...

The Score
Story: 10/10
So far, I’m finding the story very interesting. There’s a mystery about why everyone looks the same and about who dug the wells that the princess wants us to avoid. I have a feeling that there’s going to be a very satisfying end.

Characters: 7/10
I didn’t see much characterization in the game. I couldn’t tell one person’s personality from another. At the same time, I didn’t mind the lack of developed characters because they aren’t what drive the story forward.

Writing: 10/10
The writing is fantastic. It’s clear, witty, and humorous. There are no typos or grammar issues, which lends credibility to the developer’s professionalism.

Mapping: 8/10
The maps are simple but full and charming. They fit the style and mood of the game.

Art: 10/10
The visual style of Yu is purposefully retro and makes the game stand out from other RPG Maker games. I like the custom sprites and character faces.

Creative Game Design: 5/10
This game doesn’t do anything out of the box, but what it does, it does well. I appreciated how many hints were given to the player about what to do next.

Gameplay: 10/10
Yu fits the profile of a standard RPG that follows the mechanics of talking to NPCs, battling, learning new skills, and finding loot and equipment. That’s not to say anything against it. I found the game to be very enjoyable, and while I didn’t get that far, the developer says that there are multiple endings possible, which adds to the replay value.

Technical: 10/10
The game runs very well. The controls are user-friendly, and the developer has made some nice changes in presentation that fit the mood of the game.

Music: 10/10
The music is fast-paced and fun. I especially enjoyed the battle music. It’s unique and catchy.

Sound: 5/10
There aren’t many sound effects for map events, which makes them feel a little empty. In other words, where I was expecting a sound, there wasn’t one. Still, the sound effects the developer does use are pleasant and fitting.

Recommendation
Well, Yu Will be a Prince is a game that I would definitely like to play to the end. If you enjoy a good story and the tried and true mechanics of a classic RPG, I don’t think you’ll be disappointed.

Thank you so much for the review :3 Glad it went over well. I'll take note about making sure I use sound effects; I know that's a weakness of mine.

Nice game, boy. I enjoyed breaking the pots everywhere haha. And everything works very well, there is harmony between the visual and the soundtrack. My congratulations. :D

Haha I enjoyed breaking the jars everywhere too :P

I'm glad you enjoyed it! I loved creating the pots!

Congrats on your first game! :D

For those who haven't played it yet - it's a short, cute yet challenging game with three possible endings. I unfortunately got the 'bad' ending first up (not emotionally scarred at all... O_o)  but I really enjoyed the game play. Check it out!

Thank you so much!
Sorry for the emotional scars haha :) 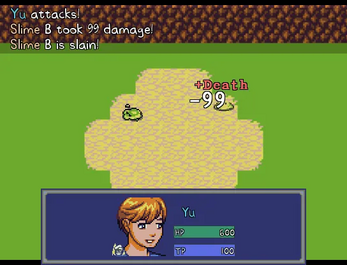 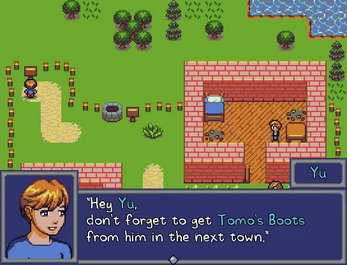